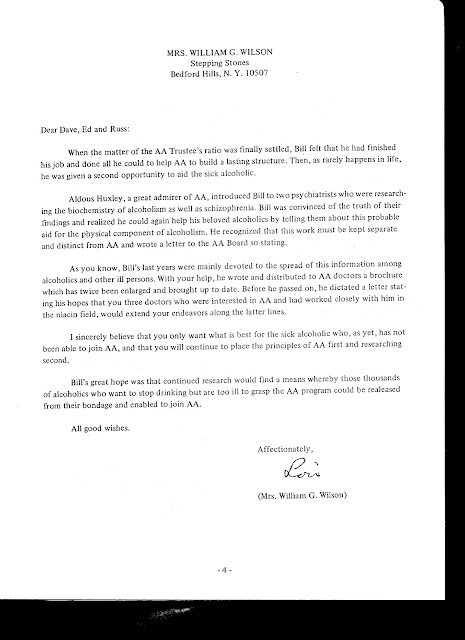 This site is in no way affiliated with the organization Alcoholics Anonymous.


This blog is about Bill Wilson., (co-founder of Alcoholics Anonymous) and the last ten years of his life.  In 1960 Bill found that by taking niacin (vitamin B-3) his life long battle with depression was relieved.  This blog is here to pass on and carry the message which Bill so passionately devoted him-self to from 1960 to 1971.  But more importantly is to here help other alcoholics recover from severe depression that happens to some of us before and after sobriety.  Remember, this was then and still is now an outside issue, please remember our 6th and 10th traditions when discussing this.

Tradition Six—An A.A. group ought never endorse, finance or lend the A.A. name to any related facility or outside enterprise, lest problems of money, property and prestige divert us from our primary purpose.
Tradition Ten—Alcoholics Anonymous has no opinion on outside issues; hence the A.A. name ought never be drawn into public controversy.


A little known obscure fact is that Bill W., The co-founder of Alcoholics Anonymous wrote three papers about the biochemical aspects of Alcoholism in the last ten years of his life.
Bill, had suffered horribly from depression most of his life, both before and after sobriety.   He found some substantial relief from this misery in 1960 after meeting two doctors in New York; Abram Hoffer and Humphrey Osmond.  These MD's were researching alcoholism and mental health disorders in Canada.


After meeting Hoffer and Osmond Bill began taking vitamin B-3 (Niacin).  Bill found such a great release from his depression that he set out to advance this second vocation for the remaining years of his life.

Bill Wilson gave his all to promote, finance and help this area of research into the field of alcoholism.  He wrote, edited and distributed three pamphlets which he sent to doctors and many friends both in and out of Alcoholics Anonymous.
The first paper was published in 1965, the second in 1968 and the last one published posthumously in 1971 with a forward written by Lois Wilson his wife.  These three papers represent the majority of his time and effort during the last decade of his life

Shorty before his death, Bill was asked what one thing he would like to be most remembered for in the history books; He said that it would be for his promotion of the B-3 Therapy, not the creation of Alcoholics Anonymous. (Ernest Kurtz, Not-God: A history of Alcoholics Anonymous (Hazeldon Press 1979) P. 137-38.

Below, in three different communications, Bill W. presents "The Vitamin B-3 Therapy;"
THE VITAMIN B-3 THERAPY: 1965 By Bill W

Niacin and niacinamide are forms of Vitamin B3. Vitamin B3 is found in many foods including yeast, meat, fish, milk, eggs, green vegetables, beans, and cereal grains. Niacin and niacinamide are also found in many vitamin B complex supplements with other B vitamins.
Niacin is used for high cholesterol. It is also used along with other treatments for circulation problems, migraine headache, dizziness, and to reduce the diarrhea associated with cholera.

Niacin or niacinamide is used for preventing vitamin B3 deficiency and related conditions such as pellagra. Each of these forms of vitamin B3 is used for schizophrenia, hallucinations due to drugs, Alzheimer’s disease and age-related loss of thinking skills, chronic brain syndrome, depression, motion sickness, alcohol dependence, and fluid collection (edema).

Niacinamide is applied to the skin for treating a skin condition called inflammatory acne vulgaris.

How does it work?

Niacin and niacinamide are required for the proper function of fats and sugars in the body and to maintain healthy cells. At high doses, niacin and niacinamide can have different effects. Niacin might help people with heart disease because of its beneficial effects on clotting. It may also improve levels of a certain type of fat called triglycerides in the blood. Niacinamide has no beneficial effects on fats and should not be used for treating high cholesterol or high fat levels in the blood.

Niacin deficiency can cause a condition called pellagra, which causes skin irritation, diarrhea, and dementia. Pellagra was common in the early twentieth century, but is less common now, since foods are now fortified with niacin. Pellagra has been virtually eliminated in western culture.

People with poor diet, alcoholism, and some types of slow-growing tumors called carcinoid tumors might be at risk for niacin deficiency.

PLEASE NOTE:
There are 3 types of Niacin:

1)  Niacin, (also known as vitamin B3, nicotinic acid and vitamin PP)  A common minor side effect of niacin is a flushing reaction. This might cause burning, tingling, itching, and redness of the face, arms, and chest, as well as headaches. Starting with small doses of niacin and taking 325 mg of aspirin before each dose of niacin will help reduce the flushing reaction. Usually, this reaction goes away as the body gets used to the medication.

3) Inositol Hexanicotinate, (also called "flush-free" or "no-flush" niacin) is a different form of niacin.  This type of niacin can have have adverse effects on the liver.

Medical Disclaimer:  The information available from this website has been prepared and/or obtained for general information, education, reference, and/or entertainment purposes only and is not intended to provide medical advice. The owner of this website is not a licensed doctor and is not providing medical advice, or diagnosing or treating any condition you may have. We are not your doctor.

You agree that you will not act upon anything contained in this website without first seeking professional medical advice.
Posted by Tom K at 2:22 PM 43 comments: